ENTREVISTA: Alan Parsons’ Art of Listening and the Science of Sound part III 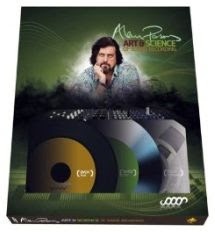 Crawdaddy!: Can people get away with just the EQ that is in their DAWs? Do you think that plug-ins or hardware is essential for great EQ?

Parsons: There’s always a box that has more musical sounding EQ than the next, but applying basic principles can be done with any [EQ]. That’s the secret—knowing what you want to achieve with EQ, and if one EQ doesn’t achieve it, then try something else.

Crawdaddy!: How can you can teach that—the art of listening?

Parsons: You can’t teach that. It’s literally, as you said, the art of listening.

Crawdaddy!: You obviously have great ears. Do you have the same ears you had when you were making Dark Side of the Moon?

Parsons: [Laughs] Well, I’m in my 60s now. You can’t change the laws of human development. There was a time that I could hear 19 KHz, and I can barely hear 14 KHz now. I think I’m blessed to have built-in early warning devices. When I was listening to too much live music, I knew I had to stop. I don’t think I’ve suffered any significant hearing damage over the years.

Crawdaddy!: You are still playing live, so you must keep a manageable stage volume.

Crawdaddy!: Do you go to concerts much?

Parsons: Not so much, no, and if I do, I take earplugs. I’m afraid I’m an old man in that respect!

Crawdaddy!: As we mentioned earlier, this loudness issue translates to recordings as well. If only a producer would stand up to a band and say, “You don’t get six guitar tracks; you only get two because anything more is sonic mud!”

Parsons: Well, it’s all about the relationship you have. A producer can’t be a dictator, and he can’t put too much of himself into working with an artist, because it is the artist’s record. But I guess I could argue that with the Alan Parsons Project, I was the artist, in a sense. Although I’m still essentially manipulating and controlling other people—directing would be a better word.

Crawdaddy!: I’ll tell you who needs a producer. The half-time show at the Super Bowl. That was embarrassingly bad, the sound at that show.

Parsons: Ah, yes, but that is often the case.

Crawdaddy!: Well, I’m trying to get my name in there. [laughs] What producers do you admire that are making music these days, or back in the ‘70s or ‘80s?

Parsons: I think that the perfect producer is the one that becomes a respected member of the overall team that makes the record. I’ve worked with so many of them, and there were so many good ones; I’ve always felt that Mickie Most [Jeff Beck Group, Donovan, the Animals] was a great producer. Sadly, he died a few years ago. He had everyone’s respect, and he knew his limits, and he knew the limits of the people he was working with. He always got great results and had a fantastic ear for a song. He could spot a hit song at 10 miles, you know?

Crawdaddy!: What about Bob Ezrin and George Martin?

Parsons: I have a lot respect for those guys, George Martin in particular. I think people can appreciate now that he really was the fifth Beatle.

Crawdaddy!: Your DVD has sort of a hall of fame of recording engineers, producers, and musicians. Was it fairly easy to line them up, and easy to select them?

Parsons: I know them all, of course. We kept bumping into each other at trade shows and at seminars and what have you. I’ve experienced how they work. Of course, engineers never work together; they’re always doing their own thing. But that’s what is so refreshing and interesting to me: To talk to them about their art, face-to-face. That was a hugely fulfilling part of making the program.

Crawdaddy!: Is there any chance of a follow-up DVD, sort of a “Master Class” that goes to the next level technically?

Parsons: We are talking about turning it into a thing where you can qualify for some kind of diploma for having viewed the series. And we are planning live studio seminars where eventually we’ll go through the process of recording a song by a band over a couple of days with a small group of people. It’s hard to compete with all the schools out there. We would have to offer something different, and in a much smaller timeframe.

Crawdaddy!: Well, I think you have already accomplished that with your DVDs. I don’t think the schools can deliver the insight and instruction directly from the kind of artists and studio professionals you have on your DVD. They don’t have the background that you have, certainly.

Parsons: Yeah, the schools, of course, can’t offer the big names. They can offer really good people. But if they were that good, they wouldn’t be teaching in schools… They’d be out there doing the job!
Publicado por MR.X en 22:47