Interview: Alan Parsons: The Artist and Scientist of Sound Recording 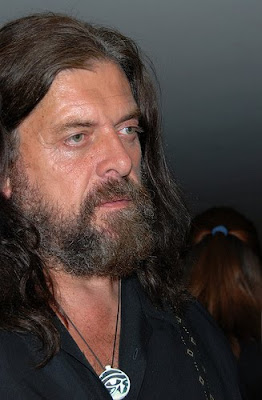 You just recently completed an event at the Spaghettini Grill and Jazz Club, where you debuted your new DVD release. Tell us a little about what this was all about.

It was essentially my old friend, David Pack from Ambrosia -- he's the voice of all the hits from Ambrosia, we've been friends ever since we worked together back in the mid-70s when I mixed their first album and produced their second. We sort of alternated between his activities and mine. He played music from the Ambrosia days, and some of the stuff he's been doing in recent times, particularly from Beach Boys and Beatles covers. I talked about my beginnings with Dark Side of the Moon and we played a lot of material in Surround Sound, which I think a lot of people were hearing for the first time in that particular audience.

And then I showcased my latest venture, which is a DVD series called "The Art & Science of Sound Recording." That was, I think, very well received.


Is that going to be generally available, or targeted toward a technical audience?

Oh yeah, absolutely! It's already available online in part -- the Website is ArtandScienceofSound.com.


Working in the IT field, and attending school with a bunch of computer and electrical engineer techies, the thing I learned musically is that, in these circles particularly, Alan Parsons is a rock god. But we've also had some debates about certain songs, and this is my opportunity to put some of those debates to rest. For instance, the meaning of the title to I, Robot's "Genesis Ch. 1 v. 32."

If you know the Bible at all, you will recognize that that chapter and verse does not exist. So it was designed to be a little bit mysterious, suggesting that there was an undisclosed verse that represented the future or the notion that God created the Earth, and then he created Man, and then possibly Man created Robot. So that was the thinking behind it.


There's also a track on Eve that includes Morse Code.

Yes, on "Lucifer." The one that's up front, the one that you hear very clearly, that's "Eve" spelled in Morse Code. But the sort of random Morse Code that you hear at the beginning of the album, that was just taken straight off short wave, and I have absolutely no idea what it says. I think somebody, somewhere, once drew attention to that and did translate it, but I don't know that it had any real bearing on anything -- there was nothing particularly interesting embedded in there.


And lastly, were the models for the album cover of Eve made up to appear with lesions, or were these real cases?

Oh no, they were definitely made up. They were totally beautiful models in every way. I only met one of them, but they were the real thing. We did get some negativity about that cover -- some people said it was anti-feminist.


The Alan Parsons Project had a very distinctive sound. You could pick up a new album, and within moments immediately identify it as an APP product. What do you consider to be the formula for an Alan Parsons Project song that makes them distinct and yet part of the collective?

It's interesting that people have said that, because I never consciously made any kind of attempt to give the Project a sound. I think one could argue that I used the same philosophy in all my productions, not just for the APP. People have said that the stuff I did with Al Stewart was distinctly my sound as well.

I don't hear it. I just work on instinct, and a series of automatic decisions. So I'm very interested to know the answer to that question myself. I can't describe what it is that makes it sound like me.


Whatever it was, it seems to not only have followed you into your solo work, but also tagged along with Eric Woolfson into his work. "Freudiana" is fraught with the APP aesthetic.


Sadly, your longtime APP partner, Eric Woolfson, passed away last December, and I was wondering if you might want to comment on that.

Only that it was very sudden news. Very unexpected. I was on tour in Germany at the time, and made an announcement to a large audience of people in Mannheim who were clearly shocked as well. He had been ill. He'd had a fight with cancer for some five years, I believe, but he very bravely never made that public. He just kept it to himself and his family. I knew, but he'd asked me not to spread the word.


You've made such groundbreaking strides in sound engineering. These days, however, wonder if artists are relying on that technology overly much, rather than on actual vocal talent.

I think you've got a point there. If you're a singer, you can sing a song two or three times and it's pretty likely that thru cutting and pasting and autotuning you're going to able to get it sounding pretty good -- which, of course, wasn't the case originally.


I had known APP songs that had broken into the top forty, but was really introduced to the group in college with Stereotomy. And I expressed that I really wanted to see the group in concert, and was told, "Well, that can never happen because so much of the sound is studio produced." But you were finally able to begin live performances after a while.

It was a decision we'd made after we'd completed the first of the solo albums, Try Anything Once. The band that played on that album, two of the guys who'd played on virtually everything else with the project -- Ian Bairnson and Stuart Elliot -- and also Andrew Powell... we just wanted to give the album every possible chance of success. So we decided to put a band together and put it on the road.

The difficulty in the past had always been, "What do I do?" You know, the record producer is only a dark figure in a live performance situation. So I dusted off my guitar and re-learned my three chords and managed to pull it off.


I understand you have a handful of shows coming up in the near future.

I think it's largely for economic reasons. The promoters are just not ready to make the investment, and they play it safe and get acts that they've worked with before. I'm not saying it's a lost cause -- home grown dates tend to happen at quite short notice. I'm pretty comfortable we'll be doing something in the summer.


My player has worn a groove in A Valid Path, so I'm ready for a new album. Do you have one coming anytime in the foreseeable future?

There's a new song which I wrote for the "Art & Science" project called "All Our Yesterdays," and that will be out online quite soon. The interesting thing (for anybody's who's interested) is that you see the track developing pretty much in the studio from the earliest stages to the final mix. I think it turned out pretty well, and one day that song will be part of an album, but for the moment it's just a one-off single release. It's there essentially to promote the DVD series.


A friend of mine wanted me to ask if you were surprised at all by your name being dropped in "Austin Powers: The Spy Who Shagged Me" as one of Dr. Evil's creations.

It was a surprise. I knew nothing about it, and it was already in theaters before I knew about it. I saw it as a huge compliment. I was very touched by the fact that Mike Myers would consider me a big enough celebrity to put my name to something -- even if it was a laser beam.
Publicado por MR.X en 22:24